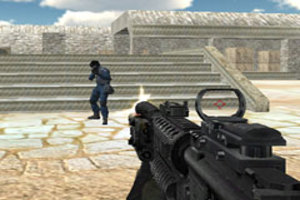 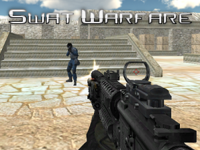 SWAT Warfare is a fantastic multiplayer enabled first person shooting game. The game is based on the UNITY engine and offers fast, frantic and fun gameplay, with great graphics and realistic weaponary.

Simply join a room, pick a team and get stuck in! Want to make it even more fun? Arrange a time for your buddies to meet you online and you can battle it out to see who is the true SWAT hero.

If you have ever played Half-Life Counterstrike, you are going to love SWAT Warfare.

How to player SWAT Warfare

To play SWAT Warfare simply choose your closest region, check if there are active game rooms available, if there are not feel free to open your own room. You can select your favourite map, pick and team and invite your friends. If the room is not locked then anyone can join your game room.

Here are the controls for SWAT Warfare:

Hit play on the video to watch a tutorial walkthrough of SWAT Warfare.

If you enjoyed this game, then check out our other cool Shooting Games.